Invented approximately 50 years ago, surgical medical meshes have become key elements in the recovery procedures of damaged-tissue surgeries, the most common being hernia repair.

When implanted within the tissue of the patient, the flexible and conformable design of these meshes hold muscles securely and allows quicker recovery than conventional surgical procedures of sewing and stitching. However, the insertion of a medical implant in a patient’s body carries the risk of bacterial contamination during surgery and subsequent formation of an infectious biofilm over the surface of the surgical mesh.

Such biofilms tend to act like a plastic coating, preventing any sort of antibiotic agent from reaching and attacking the bacteriaformed on the film in order to stop the infection. Thus, antibiotic therapies, which are time-limited, could fail against super-resistant bacteria and the patient could end up in recurring or never-ending surgeries that could even lead to death.

In fact, according to the European Antimicrobial Resistance Surveillance Network (EARS-Net), in 2015, more than 30,000 deaths in Europe were linked to infections with antibiotic-resistant bacteria.

Physicians have used several approaches to prevent implant contamination during surgery. Post-surgery aseptic protocols have been established and implemented to fight these antibiotic-resistant bacteria, but none have entirely fulfilled the role of solving this issue. 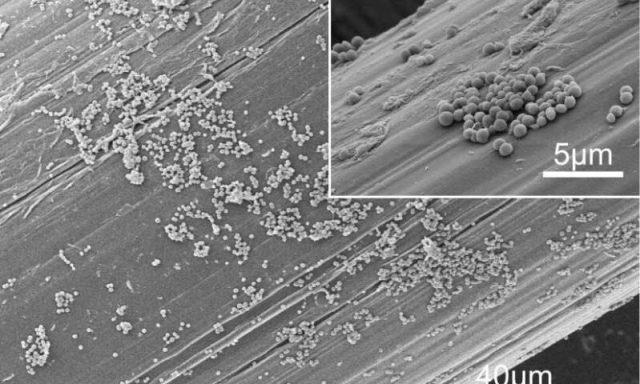 
In collaboration since 2012, the team of researchers at ICFO and B. Braun Surgical, S.A., developed a medical mesh with a particular feature: The surface of the mesh was chemically modified to anchor millions of gold nanoparticles.
Why? Because gold nanoparticles have been proven to convert light into heat highly efficiently at localized regions.
The technique of using gold nanoparticles in light-heat conversion processes had already been tested in cancer treatments in previous studies.

Knowing that more than 20 million hernia repair operations take place every year around the world, the researchers believed this method could reduce the medical costs in recurrent operations while eliminating the expensive and ineffective antibiotic treatments that are currently being employed to tackle this problem. 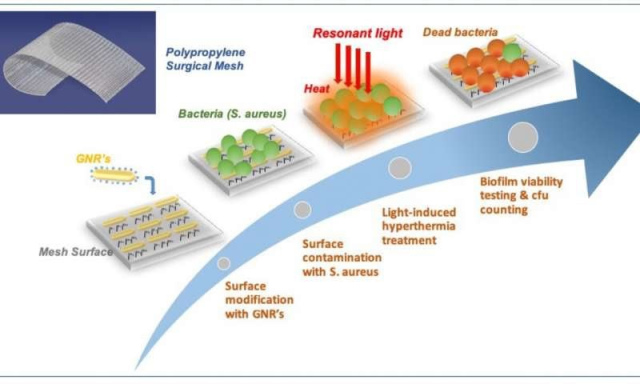 Schematic view of plasmon-enabled biofilm prevention on surgical meshes. The mesh surface is functionalized to enable robust and homogeneous GNR coverage. The modified mesh is then inoculated with S. aureus to induce the formation of a biofilm. Treatment is performed by a train of light pulses from a filtered IPL (750- 1200nm), covering the main localized plasmon resonance of the GNRs. Biofilm viability study and CFU counting are finally used to evaluate the treatment efficiency

Thus, in their in-vitro experiment and through a thorough process, the team coated the surgical mesh with millions of gold nanoparticles, uniformly spreading them over the entire structure. They tested the meshes to ensure the long-term stability of the particles, the non-degradation of the material, and the non-detachment or release of nanoparticles into the surrounding environment (flask). They were able to observe a homogenous distribution of the nanoparticles over the structure using a scanning electron microscope.

Once the modified mesh was ready, the team exposed it to S. aureus bacteria for 24 hours until they observed the formation of a biofilm on the surface. Subsequently, they began exposing the mesh to short, intense pulses of near infrared light (800 nm) over 30 seconds to ensure thermal equilibrium was reached, before repeating this treatment 20 times with four seconds of rest intervals between each pulse.

They discovered the following: First, they saw that illuminating the mesh at the specific frequency would induce localized surface plasmon resonances in the nanoparticles—a mode that results in the efficient conversion of light into heat, burning the bacteria at the surface.

Second, by using a fluorescence confocal microscope, they observed how much of the bacteria had died or was still alive. They observed that the remaining living biofilm bacteria became planktonic cells, recovering their sensitivity or weakness toward antibiotic therapy and to immune system response. They observed that upon increasing the amount of light delivered to the surface of the mesh, the dead bacteria would lose their adherence and peel off the surface.

Third, they confirmed that operating at near infrared light ranges was completely compatible with in-vivo settings, meaning that such a technique would most probably not damage the surrounding healthy tissue. Finally, they repeated the treatment and confirmed that the recurrent heating of the mesh had not affected its conversion efficiency capabilities.

ICREA Prof at ICFO Romain Quidant says, “The results of this study have paved the way towards using plasmon nanotechnologies to prevent the formation of bacterial biofilm at the surface of surgical implants. There are still several issues that need to be addressed but it is important to emphasize that such a technique will indeed signify a radical change in operation procedures and further patient post recovery.”

Director of Research and Development of B. Braun Surgical, S.A. Dr. Pau Turon, says, “Our commitment to help healthcare professionals to avoid hospital related infections pushes us to develop new strategies to fight bacteria and biofilms. Additionally, the research team is exploring to extend such technology to other sectors where biofilms must be avoided.”

Get the latest new about trending and best material properties and quotation directly in your inbox.